The month of June ushers in the summer solstice and with it one of Ibiza’s most traditional fiestas. We are referring, of course, to the celebrations at Sant Joan de Labritja, in particular to its magical “Nit de Sant Joan” (Night of St John).

The festivities will be commemorated, like every year, with a variety of shows and activities such as folk dancing, craft and hippy markets, rock concerts, religious processions…the most alluring aspect of the fiesta, however, is the mystical night of fire: la nit de Sant Joan.

The element of fire is the featured protagonist of these ancient rites. On the night of June 23rd, bonfires (called “foguerons”) are lit in town squares and on beaches across the island, their higher function being that of purifying us and welcoming in the summer. The bravest of those assembled will jump over the bonfires in a symbolic act of leaving behind a finished chapter of life. Various superstitions are linked to this special night, for example, throwing something old onto the bonfire and watching it burn, or, alternately,  writing down wishes on a piece of paper, then throwing the crumpled paper onto the fire, and jumping three times while the wishes are consumed by the flames. It is a night of big crowds and upbeat energy. The magical hour is, of course, midnight when everything comes to a fever pitch.

As every year, Sant Joan de Labritja is going all out to prepare for their fiesta. Remember, the big night is the 23rd to the 24th of June, a rough approximation to the summer solstice, the shortest night of the year. According to tradition, at midnight nine bonfires are lit (els nou foguerons). The most daring among the celebrants jump over them, letting go of what they do not like in life and welcoming in the new. Naturally, bunyols (small sugared doughnuts) are passed round on trays and the country wine (ví pagès) flows. 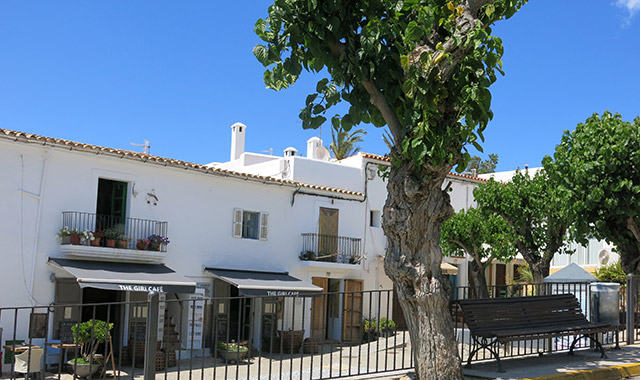 Another of the traditions related to this feast day, in this case a gastronomic one, are the “macarrons de Sant Joan” or St John’s macarroni. This unusual sweet dish is made from noodles (not macarroni) cooked in sweetened milk with cinnamon and lemon zest. Very easy to make, this is one of the season’s most popular desserts.

Without a doubt, Sant Joan is one of the most exciting fiestas of the year. We recommend it to one and all!